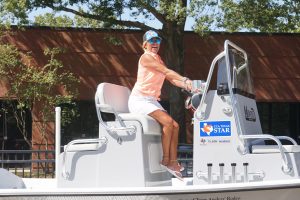 Kimberly Schurwon of the Woodlands, TX was the THIRD CERTIFIED BLUE-Tag WINNER and was awarded a 2022 Mowdy 22′ V boat with a Mercury 150L Pro XS Optimax and Coastline Trailer.

Once the anchor was out, she grabbed some live shrimp, took her rod and reel, and cast the shrimp near old pylons. It did not take long after that shrimp hit bottom before something got a hold of it. She set the hook, and the fight was on! Once that fish was hooked, it tried everything to escape, including running through and around those pylons! Kimberly recalled, “It was like I was reeling that fish in through an obstacle course!” She could feel the line dragging across the pylons and knew it would break off if she did not bring that fish in quickly. Once the redfish was safely in the net, she realized it had a tag waving at her. Kimberly yelled to her husband, “Give me my glasses! IT’S A 2022 BLUE-TAGGED REDFISH!” With cheers all around, Kimberly clipped the tag, released the redfish, and headed off to one of our official weigh stations, West End Marina, to turn in the tag. 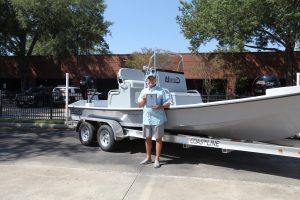 Randall Kelly of Rockport, TX was the second CERTIFIED BLUE-TAG WINNER and was awarded a 2022 Mowdy 22′ V boat with a Mercury 150L Pro XS Optimax and Coastline Trailer.

With tides changing, Randall decided to either go south towards Ingleside or north towards Rockport. Randall and his wife Sandra headed north up the ICW to Turtle Bayou flats. With the day’s heat upon them, Randall knew that these fish would be in deep guts off the flat. Each time they would hook up, Sandra would yell in hopeful anticipation, “TAG! TAG! TAG!” The power of positive thinking is REEL! Randall grabbed his rod and reel and cast the mullet into the gut, and BAM, he was hooked up! Once the redfish was within reach of the net, they noticed algae on its back. Upon further investigation, it was a BLUE tag! With the Blue tag in hand, Randall headed off to one of our official weigh stations, Terry’s Seaworthy Marine Supply, to turn in the tag. 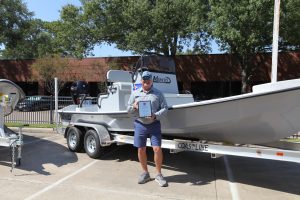 Steve and his fishing buddies Jim and George pushed off early Monday morning June 20th, 2022, from North Padre Island. While running down the ditch, George asked the guys, “Where do y’all want to fish this morning?” Jim replied, “Wherever the tagged redfish are.” George set a course to one of their tried-and-true spots on the flat near Pita Island. With the motor up and a slight breeze at their back, they floated across the extensive flat. Being the good friend that he is, Steve positioned himself at the stern of the boat to let his buddy Jim cast from the bow in hopes to get him on more fish. With a rod and reel in hand and scattered potholes all around, Steve let his bone super spook fly. With a few twitches of the wrist that familiar sound of a topwater exploding on a calm morning set in and Steve was hooked up. He exclaimed, “She Blew it Up!” It was not until the redfish was safely in the net before they realized that it had a BLUE- tag waving at them! With cheers all around, Steve clipped the tag and released the redfish. With the Blue tag in hand, Steve headed off to one of our official weigh stations, Roy’s Bait & Tackle Outfitters, to turn in the BLUE Tag. Thank you, Senior Chief Stephen Berris, USN, ret for 26 years serving this country! 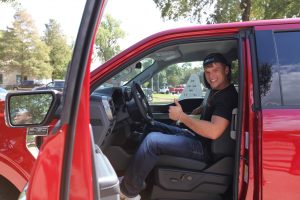 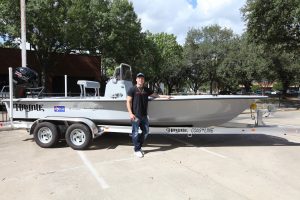 For Kasey Arnst, this was not a typical Monday. Ordinarily, Kasey would be starting his work week, but this Monday marked the first work day after losing his job. Over the weekend, knowing he would not work on Monday, Kasey decided to sign up for the CCA Texas STAR Tournament and head to Galveston to spend time fishing. Once there, he pulled out his cast net, snagged a few mud minnows, and waded into the water. With his rod and reel in hand, he cast his line out and waited for a bite. The line went taut, and he set the hook! Once the redfish was within reach of the net, he noticed what appeared to be algae on its back. Upon further investigation, it was a RED tag! Kasey’s luck had just changed; what had initially seemed to be a misfortune Monday turned into the most fortunate day as he landed the tagged red, making him our third RED tag winner. Kasey clipped the tag, released the redfish, and headed off to one of our official weigh stations, West End Marina, to turn in the tag. 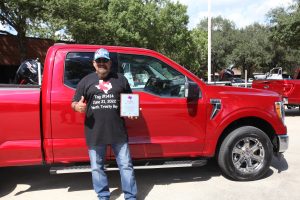 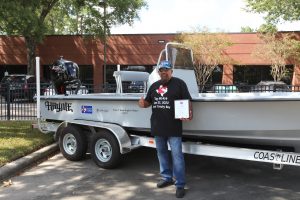 Heriberto Flores and his buddy struggled all afternoon, finding live bait and fighting the rain. Once they caught a handful of shrimp and a few finger mullet, they caught a break in the weather, and Heriberto said, “Let’s go. Let’s go try it with this.” After pulling up to their regular spot in North Trinity Bay, they saw multiple boats were already there, and one was catching redfish out in the distance. After using what little bait they had catching flounder, they needed more bait and were able to bring in nickel-sized baby shad. After the boat that was catching those redfish left, Heriberto took the opportunity to grab the spot and set up shop there. He tried everything he could, even yelling “Tag, Tag, Tag” after each tug of the line. He went back into the live well one last time and grabbed those baby shad, and with rod and reel in hand, he let the bait fly as far as he could. Suddenly, he felt a tug on the line and started screaming. Again, he yelled, “Tag, Tag, Tag,” as he told his buddy to grab the net. It wasn’t until the redfish was safely in the net that he realized that this one had a tag! At first, he couldn’t see what color it was since it was covered in algae. He yelled to his buddy, “Video me! Video me! This one has a tag in it! Come on!” With the redfish in hand, he began to strip the algae away, revealing a RED-Tag! As they were celebrating, Heriberto clipped the tag and released the redfish. With the Red tag “safely” in his teeth, he headed off to one of our official weigh stations to turn it in. [Linda’s Bait & Tackle] 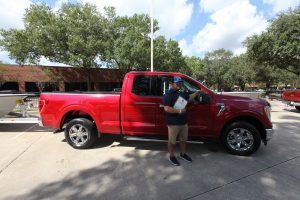 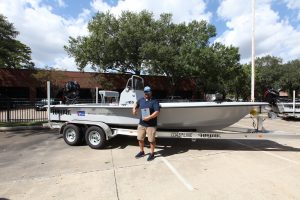 On June 4th Mr. Rocha and his buddy set off down the Lydia Ann Channel in search of an inlet with sufficient bait and clear water. Their first stop of the morning would prove to be the most important decision they made that day. Not long after starting their wade, the bite was on! With live shrimp in hand and plenty of bait working, Mr. Rocha hooked into a redfish which he soon realized was the fish of a lifetime. With the drag burning and his pole bent, the redfish finally came into sight with the RED tag waving at him! He shouted, “It has a RED tag!” Both the nearby boat and his buddy yelled, “Get ’em! Get ’em!” The redfish made one last run with the red tag vanishing into the depths, and it must have felt like an eternity. Soon, he gained more and more of the line back. Finally, the redfish came close enough to be netted, and he finally landed the RED-tagged redfish! With cheers all around, Mr. Rocha clipped the tag and released the redfish. With the Red tag in hand, Mr. Rocha headed off to one of our official weigh stations.
Roy’s Bait & Tackle Outfitters, to turn in the RED tag. 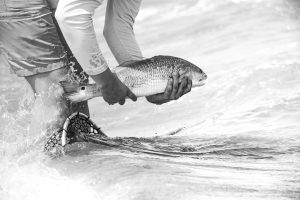 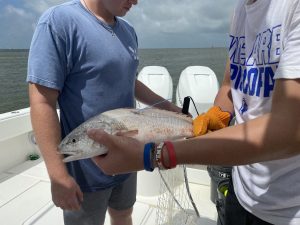 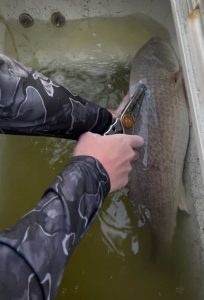 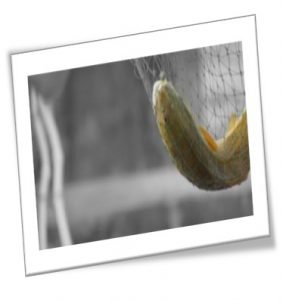