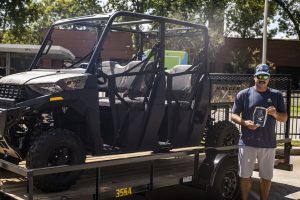 Early morning showers and a tough bite trolling for Wahoo led him 50 miles East of Port Aransas to North Baker in search of red snapper. There is no doubt that Matt was destined to catch this potentially winning snapper, especially since he was the only STAR-registered angler on the boat that day. It all went down when he felt a tug on the line and momentarily thought about passing the rod and reel off so someone else could enjoy a great fight. When he looked over his shoulder and saw his friends were already hooked up, he decided to keep it for himself. Good thing he didn’t pass that fish off. “I didn’t know what I hooked into, but it took a lot of line out and was not fighting like a typical snapper.” Once he saw the color change, he knew it was MASSIVE and reeled it in!